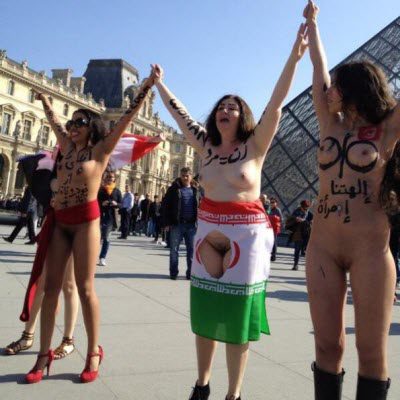 SEVERAL Arab women used the occasion of International Women?s Day to march naked in front of the Louvre Art Museum?s Square in Paris calling for equality and secularism in the Muslim world.

Earlier this week, International Women?s Day was celebrated all over the world, with lectures, symposia, seminars and rallies. It was used as an occasion to protest against gender inequality, domestic violence, forced marriages, misogyny and all other forms of sexism, which tends to be most extreme in the Arab world.

In most Arab countries, women are forced to cover themselves from head to toe and are not allowed to drive, whole in several countries, women are even forbidden from working. Protesting this unjust discrimination, the Arab women in Paris walked around the Louvre Art Museum?s Square naked carrying flags of countries like Tunisia, Iran, Algeria and Egypt.

French police officers were lenient toward the women and allowed them to circle the art museum?s pyramids. They even refrained from asking the crowds who gathered around them to disperse until after the protesters covered their bodies and started talking to the press.

Maryam Namazie, an Iranian political activist and Spokesperson for Fitnah, the Movement for Women?s Liberation, said: ?I didn?t want to just hold the Islamic regime of Iran?s flag so I cut out the Allah in the centre of the flag and let it show my vagina instead. Much better.?

We were arrested when 100 police converged on the area and took us away but we were released after several hours. I managed to catch my Eurostar train one minute before it took off with the help of Waleed Al Husseini wearing a Free the Nipple T-shirt Amina gave us each.?

Amina al-Souboui added that she is terrified at the Islamists? behaviour in Arab countries where women are treated as second class citizens. Under Sharia law, women who commit adultery and prostitutes can be stoned to death.

Today is International Day of the World’s Indigenous Peoples