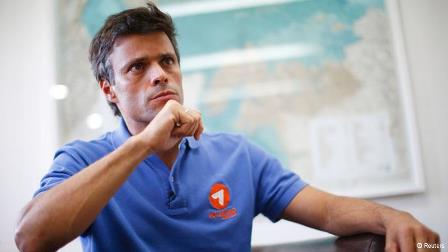 A warrant has been issued by a Venezuelan court seeking the arrest of Venezuelan opposition leader Leopoldo Lopez on charges including murder and terrorism for his role in protests that resulted in the death of three people?on Wednesday. Venezuelan President Nicolas Maduro has accused Lopez of trying to instigate violence in a bid to mount a coup. At least three people were shot dead as violence erupted during anti-government protests in the Venezuelan capital of Caracas?on Wednesday. Police clashed with violent activists who threw Molotov cocktails and rocks, using tear gas to disperse about 1,500 demonstrators nearby. Lopez is a former mayor of one of the five districts in Caracas.

?President Maduro and other senior government officials said the violence was centered with small groups operating according to a plan which was being managed by Lopez with the assistance of a handful of other opposition figures. According to a report from Informativa Pacifica, the plan was organized in Mexico and included a current Mayor of a Venezuelan city, whom is also a close friends of former Colombian president Alvaro Uribe Velez.

?Also, a recording of a telephone conversation surfaced that appears to show two former right wing officials discussing or planning the implementation of the violence?Wednesday?a day before it began. The two former officials – Fernando Gerbasi and Mario Carratu Molina – compared what was to come to?April 11, a reference to the beginning of the 2002 coup attempt against former President Hugo Chavez, that was ultimately defeated by a massive popular uprising in defense of the socialist government. Gerbasi is a former Minister of Foreign Affairs for Venezuela and former Ambassador to Colombia, Brazil and Italy. Molina is a retired vice admiral of the Venezuelan Navy.

?Meanwhile, the governor of Tachira, Jos? Gregorio Vielma Mora, reported?Friday?that Colombian paramilitary groups and terrorists have infiltrated protests being carried out by students in that area of the country.

?Speaking to teleSUR, Vielma Mora reported that these irregular groups attempted to damage an electricity substation that supplies power to 63 thousand people. He said that protesters had also damaged the Environmental Health Authority compound and tried to burn the headquarters of the state Centers for Comprehensive Care. He also reported damage to the headquarters of the Bolivarian University of Venezuela in Tachira .

?Vielma Mora noted that, despite the protests and vandalism, there have been no injuries or deaths of protestors. He said, however, that four National Guard members and 6 police officers were wounded.?

Maduro was on national TV again?Thursday?evening, detailing a plan to deescalate the violence. He said “This Saturday?all the people of Caracas will be mobilized against fascism, violence and coups to demonstrate in the street that we want peace, coexistence, democracy and socialism.”

?According to some observers, Maduro knows the plan behind the violence, which rests on the hope that the government will respond with force, allowing the privately owned media to denounce it for repression and brutality “against its own citizens,” as was done in Iraq, Libya and Syria to enable the imposition of sanctions and, ultimately, war and regime change.