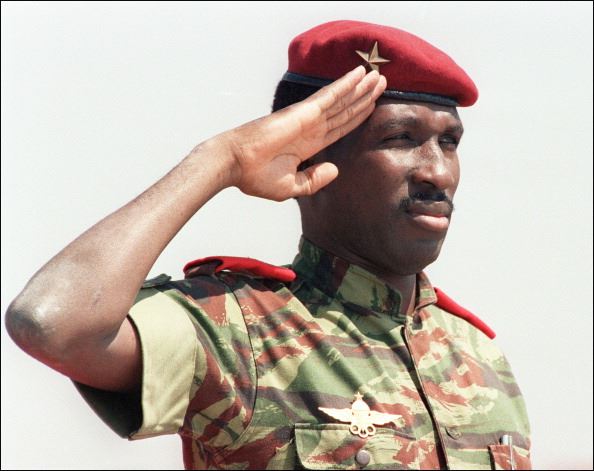 So, Blaise Compaor? of Burkina Faso has bitten the dust!

His fall can only be described as well deserved.

A complete nonentity who rode to fame in 1983, on the shoulders of the far more intelligent and idealistic young soldier, Captain Thomas Sankara, Compaor? did not scruple, only four years later, to have Sankara brutally murdered.

History is full of political murders, of course, but this particular one was heinous in its absolute heartlessness. For Compaor? and Sankara were supposed to be ?blood brothers? who worked together and ?ate together.?

So much so that Sankara stated in a published interview, ?If you hear that Blaise [Compaor?] is doing a putsch against me [Sankara] don?t think of doing anything about it or warning me: it will be already too late!?

Shortly after Sankara had given Compaor? such a ringing endorsement,
Compaor? rewarded Sankara with a coup, in which Sankara was
murdered and his body dismembered.

Sankara?s mother, who had often fed Compaor?, is said to have pleaded in vain to have her son?s body returned to his family for a fitting burial.

Compaor? turned a deaf ear to her pleas. But several years later, when
Compaor? thought he needed to use Sankara?s name to achieve his political
objectives of the moment, he had a national shrine built in Sankara?s memory! Opportunism at its worst.

Compaor? supported some of the nastiest political uprisings in West Africa. He is said to have been the person who introduced Charles Taylor of Liberia and Foday Sankor of the limb-chopping Revolutionary United Front (RUF) in Sierra Leone, to the late Col. Muammar Gaddhafi of Libya, who financed and armed both movements.

One would wonder why the French propped Compaor? up for a good twenty- seven years if one wasn?t aware that France had carried out the same bizarre policy of populating its sphere of influence on the African political landscape with similar buffoons ? Bokassa [Central African Republic], Eyadema [Togo] Nguesso [Republic of Togo] and Bongo [Gabon].

The similarly French-favoured Togolese dictator, Etienne Gnassingbe Eyadema, bestrode the political space of his country for aabout 40 years! There is little doubt that Compaor? would have attempted to equal, or even break, Eyadema?s record of political longevity had the people of Burkina Faso not decided to do a General Guei on him. (General Guei, it will be recalled, claimed to have won an election in the Ivory Coast in 2001, but was forced out of power when Ivorians took to the streets and chased him out of Abidjan.

Compaor? was, of late, quite useful to both France and the United States, as they sought to curb the Islamist insurgency in Mali and elsewhere. So
France and the US might be tempted to help him to try and regain power.

This would be a mistake, for power-drunk people can only be a liability to their supporters.

Also, there is no reason to doubt that whoever takes power in Burkina Faso would assist in every possible way to end the bloody Islamist onslaught in West Africa.

The immediate cause of Compaor??s fall was his attempt to get his country?s Parliament to rubber-stamp a constitutional amendment that would
have enabled him to extend his term of office by another five years.

He?d done this before, and his fellow countrymen, aware that he might do it again in the future if allowed to ? and who wants a life President these days?? said ?Enough!?

They congregated in the streets of Ouagadougou, set fire to the National Assembly building and the houses of some Parliamentarians, as well as the headquarters of Compaor??s party ? the Congress for Democracy and Progress. Some demonstrators even tried to attack a military barracks in the capital.

It was the lackadaisical repose of the military and the police to this violence that gave Compaor??s confidence game away. At first, the chief of the army said only that Compaor??s government had been ?dissolved?.

But Compaor? also used the same words in a TV broadcast, implying, however, that there was to be a one-year transitional government, headed by himself, which would rule until the elections scheduled for November 2015. Discussions would take place with the Opposition, he promised.

But the Opposition were having none of it. Compaor? had failed to announce that he had abandoned his plan to extend his tenure of office and every discussion should begin with his resignation, the Opposition maintained.

Compaor? had, of course, failed to read the signs in his own country, as related to his laxk of popularity.

This was foohardly, because in 2011, he was forced to flee from the capital when a mutiny broke out amongst elements in the Burkinabe army. This would have shaken everyone else, because a regime headed by a military man usually manages to pacify elements within his own army who become dissidents.

Compaor? probably thought that he had done this by weeding out some of the dissidnets from the army, and that he was therefore safe.

But in politics, three years is a very long time indeed.

As soon as the soldiers and policement failed to mow down the demonstrators, despite the damage they had done on 30- 31 October 2014, it was clear that the end for Compaor? had come.

The last that was heard about Compaore was that he had left for the border and that he might come to Ghana. If he does, our Government would do well to remember this eternal rule in foreign policy: a country has permanent interests, not permanent friends.

The friend we need is theBurkinabe Government (whoever is in charge of it) not individuals from Burkina Faso. Of course, we have obligations regarding refugees.

But we also have rules about how refugees should behave, if they seek asylum in Ghana.

Friend of Compaore installed as president of Burkina Faso after coup