This is to honour the works of the former late President.

The assembly has also named 68 other roads within the area after prominent citizens from the various communities.

He said plans were advanced to rehabilitate the entire stretch of roads.

In another development, the Ghana News Agency reports that Mr Bright E.K. Demordzi, the Member of Parliament (MP) for Bortianor Ngleshie Amanfro, has said projects initiated in the constituency are on course and will be completed on schedule.

?Water expansion projects at Bortianor, Old Bortianor and Tomefa are also progressing and will be completed as scheduled,? he added.

Mr Demordzi was speaking at a sensitisation durbar organised by the Ga South branch of the National Commission on Civic Education (NCCE) in collaboration with the MP to educate the people in the areas on sanitation and the need to observe personal hygiene.

He said Parliament had approved a 37 million euro facility to construct 15 polyclinics, and Bortianor was one of the beneficiaries under the programme.

Parliament, he said, had also approved a loan facility for the commencement of the Kasoa interchange next year and that project would take care of auxiliary roads and gutters at Kasoa, Amanfro and its environs.

The durbar, the second in a series in the constituency, was to raise awareness of health issues, security and proceedings in Parliament. The first one was held two weeks ago at Amanfro.

Mr Demordzi also announced that Amanfro and Bortianor clinics would soon be upgraded into polyclinics and commended the chief of Amanfro for releasing a parcel of land for the construction of an Information and Communication Centre at Amanfro.

Mr Demordzi said the GH?400,000 ICT Centre had been completed and would be inaugurated by the end of October.

He said Bortianor was the first community that would benefit from the Greater Accra Water Expansion project that was aimed at providing pipe-borne water in every household in the region.

The MP said plans to build a Senior High School and a market for Bortianor community were still high on the government?s agenda. 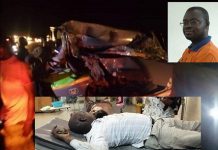