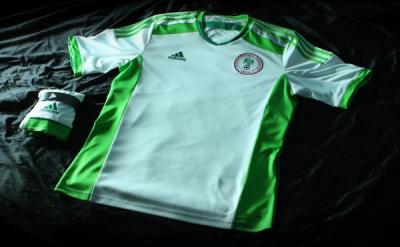 Nigeria’s 2014 World Cup jersey will be officially unveiled at a ceremony in Abuja on Thursday. The kit designed by sportswear company Adidas has whipped up excitement among many fans who are keen to see their country’s new uniform.

The Nigeria Football Federation will do the honours of presenting it to sports minister Bolaji Abdulahi among other government officials and elected members of the National Assembly.

“There is a uniqueness about the new jersey that Nigerians will love. The design is a top-of-the-range thing specially for the FIFA World Cup Brazil 2014,” NFF secretary general Musa Amadu is quoted in a press release.

Already available at the Adidas shop at the Ikeja Mall in Lagos, Goal findings reveal that the jersey is a departure from the norm with its use of lemon green instead of the deeper hue that’s in the Nigerian flag.

It harps back to the jersey used by the national team during the 2002 World Cup.

Many Nigeria fans have complained of being unanble to buy the jerseys online as they are unavailable on the official Adidas site where other jerseys like Germany, Argentina, Spain and Mexico are on sale.

Newly elected GJA Executives To Be Sworn Into Office Tomorrow

Finance Minister To Appear Before Parliament Over COVID Cash