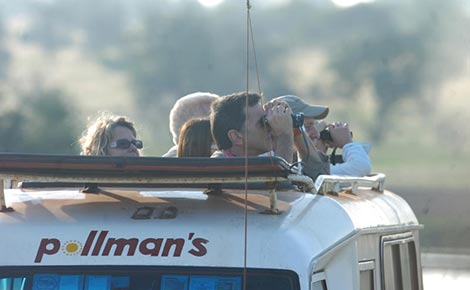 Failure to agree, both countries will resort to the 1985 bilateral agreement that stipulates how tourism vans access each country?s market. Kenya will continue to bar the vans from accessing JKIA as stipulated in the agreement. The row has elicited mistrust, suspicion and delicate relationship between the two countries in an already sour relation between the two East African Community neighbours and trade partners.

The agreement provides that tourist vans from Kenya drop passengers at the border posts at Lunga Lunga, Taveta, Namanga and Nyakiyakaye on the Kenyan side and Tanzanian vans drop at Horohoro, Himo, Namanga and Sirare.

Further, Kenyan tourist vans are allowed to transport tourists to the regional towns of Tanga, Moshi, Arusha and Musoma while Kenya gives access to all towns. The agreement does not provide for entry into partner States? airports, game reserves and parks which has been the main bone of contention.

This inconveniences Kenyan tour operators? clients who have to switch vans if they want to cross the Mara River and view Tanzanian game animals. However, when Kenya decided to fully implement the agreement, Tanzania came out with guns blazing accusing Kenya of being the ?bad brother?. This prompted Tanzania?s Tourism Minister Lazaro Nyalandu to fly in to meet his Kenyan counterpart.

Kenya?s East African Affairs, Commerce and Tourism Cabinet Secretary Phyllis Kandie told Weekend Business that it isTanzania that has been dragging its feet in resolving the dispute long after the five EAC member states came up with a single tourism visa for the region.

?A meeting to review issues on tourism came up in Bujumbura in 2013 involving Kenya, Uganda and Tanzania. The EAC secretariat asked the three countries to review their bilateral agreements. Kenya and Uganda did but Tanzania asked for more time to consult,? Ms Kandie said.

She explains that in February 2014, another meeting under the auspices of the EAC secretariat was convened and outstanding issues between Kenya and Uganda were ironed out. It was resolved that Kenyan and Ugandan tourist vans with PSV stickers be allowed across border between the two countries until such a time that all EAC countries will have the stickers.

But Tanzania?s Mr Nyalandu argues that airports are not part of the agreement. He however, declined to discuss the matter further when he paid Ms Kandie a visit saying another meeting is slated for Arusha where he hopes the matter will be resolved. Further Tanzania is yet to implement the Common Market Protocol that allows free movement of goods, persons, services and capital that would have prevented the current spat between the two countries.

While some analysts following the standoff argue that the Kenyan move was against the spirit of the East African Community (EAC), Kenya?s business community sees it differently. ?As a country, we have lost heavily in the tourism sector. We used to have the Maasai Mara-Serengeti-Tsavo triangle but with Tanzania?s attitude, we lost. Kenya should politely stand firm and bar vans from accessing Kenya the same way Tanzania does,? Polycarp Igathe, managing director Vivo-Energy ( Kenya) and former chairman Kenya Association of Manufacturers said.

?We allow Tanzanians into our ?sitting rooms but they only meet us at the gate?. If they don?t want to allow our vans in their country, then why should we allow theirs?? Igathe said the two countries are better off together than running their affairs as individuals.

However, Kenya Association of Tour Operators (KATO) Chief Executive Officer Fred Kaigua said the problem lies with?Kenya that has not been implementing the agreement unlike Tanzania which started early. This hurt Kenyan operators.

?This gave the Tanzanian tour operators a leeway to continue accessing our airport and national parks. Tanzaniastarted implementing the agreement after 2009 but Kenya started last year,? said Mr Kaigua.

Kaigua said Kenya has been allowing tourist vans from Tanzania to access the airport as well the national parks, a situation that had led to unfair competition in the industry.

By Luke Anami and Nicholas Waitathu, The Standard

Uneasy Calm In Parliament: Action To Be Taken On Overpayment To MPs

Kenyans working to break the pattern of disputed elections