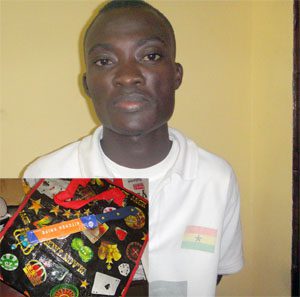 Enoch Adjei. INSET: The knife and the money sack

A 22-year-old division two footballer who plays for Rex Football Club, Dansoman, has been arrested by the police for attempting to murder his biological mother for a money-making ritual.

The suspect, Enoch Adjei, currently in police custody, allegedly lured his 50-year-old sick mother from Jasikan in the Volta Region to Kasoa in the Central Region for the supposed sacrifice when the police accosted him.

He also had in his hand, a bag meant for the money, a pot to collect the mother?s blood and a sharp knife, which was to be used for the killing for the sacrifice. He was heading towards the shrine of the supposed spiritualist with the mother, when the police arrested them at Tetteh Quarshie roundabout, yesterday.

The suspect, who was convinced, took the number and hid it for some months.

After enduring difficult times, the suspect picked up the contact of the spiritualist and got in touch.

Early this month, he called the supposed spiritualist on phone for enquiries on the procedures to follow for persons who wanted quick money but dialled a wrong number.

The receiver, knowing the intention of the suspect feigned interest in the whole deal and consequently told Adjei it involved human sacrifice.

The suspect who claimed he takes care of his ailing mother and his own child, decided to use the mother for the money ritual instead.

The spiritualist immediately informed the police and quickly called the suspect to stop and rather try and bring the mother alive so she could be killed in the shrine.

?The supposed spiritualist told Adjei that unless the mother is brought physically for the sacrifice to be made; killing her at a different location will not work,? he was told.

The two, then agreed to they meet on Wednesday, February 26, 2014 at Tetteh Quarshie together with the mother.

The suspect was requested to bring a new sharp knife, a ?Ghana must go bag?, and a pot.

Around 8:00am, yesterday morning, the suspect got to Tetteh Quarshie roundabout and called the spiritualist as agreed.

He then agreed to meet the spiritualist with the mother at Tetteh Quarshie roundabout early Wednesday and go together with him to his shrine.

The suspect had confessed to the act and added that life had been difficult for the family, which was why he wanted to sacrifice the mother who is currently sick to save the rest of the family from a biting poverty.

The suspect is currently in police custody awaiting trial.

Anyone Who Contests John Boadu Will Waste His Money – Chairman Wontumi

‘The money is sitting in our account’ – Adutwum on US$1.2M World Bank cash

The impact of using Ecological Rockets Stoves for cooking

Public Advised Not To Pay Money To Bail Suspects In Custody

Gov’t Has Been Using Part of the US$3.5bn Borrowed to Pay Ex-Gratia and Salaries of John Mahama Since 2017: Razak Kojo Opoku Writes