This year?s Dr. Martin Luther King, Jr. Rally and March commemorated the 50th anniversary of the Selma campaign that created the conditions for the passage of the Voting Rights Act of 1965. The program was organized by the Detroit MLK Committee, a coalition of community organizations and churches that are involved in the ongoing movements for human rights, peace and self-determination. 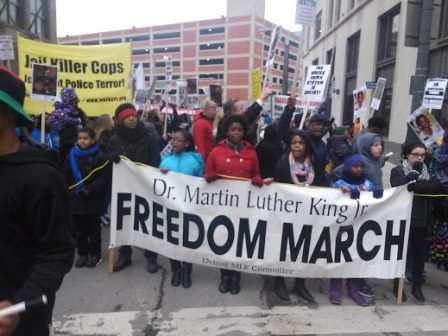 On Jan. 19, a standing-room-only crowd gathered in the sanctuary of the Central United Methodist Church where Dr. King had spoken on numerous occasions between 1958 and 1968. In fact just three weeks prior to his assassination, on March 14, he addressed the city of Detroit at his annual Lent Sermon delivered for the last time.

The 2015 gathering was one of the largest since 2004 when the event was founded. Organized by the Michigan Emergency Committee Against War & Injustice (MECAWI) during the first year, in 2005 a broader alliance was formed which has continued to plan the gathering since then.

Held under the theme ?50 Years Since Selma: The Struggle for Democracy, Peace and Social Justice Continues?, a program introduction supplied to the crowd said ?we are recognizing the valiant contributions of the struggle for voting rights by Dr. King, the founder of the Southern Christian Leadership Conference (SCLC), in addition to the Student Nonviolent Coordinating Committee (SNCC) and others who paved the way for the advances gained during the 1960s and 1970s.?

This statement goes on to note that ?Nonetheless, today we are facing the most profound challenge to the status of civil rights, human rights and economic justice since the martyrdom of Dr. King in 1968. In the state of Michigan, fundamental rights to a living wage, collective bargaining, municipal pensions, public services and basic democratic rights have been eroded.?

The program began with an invocation by the new pastor at Central United Methodist Church, Rev. Dr. Jill HardtZundel, who welcomed people emphasizing the long tradition of support for social justice movements, the working class and poor. The church provides regular meals, clothing and other services to homeless people living in the downtown area.

A special tribute was paid to the late Judge Claudia House Morcom who passed away during Aug. 2014. Judge Morcom was a major supporter of the Detroit MLK Day attending every year.

This acknowledgement of her pioneering legal work during the Civil Rights Movement and decades-long political activism was presented by Dr. Gloria Aneb House, her niece by marriage, Cheryl LaBash of the National Network on Cuba, which Judge Morcom worked with closely surrounding the now successful efforts to free the Cuban Five as well as to ease the embargo against the socialist country in the Caribbean, and Carol Lane, a supporter of Cuba and a veteran peace activist in Detroit.

Later there was a speech by Cecily McClellan of the Detroit Active and Retired Employees Association (DAREA), which is appealing the theft of pension funds and healthcare programs from former municipal workers. McClellan stressed that the imposition of emergency management and bankruptcy was merely a cover to loot over $6 billion in pension funds in the city of Detroit.

A solidarity statement in support of the injured Colombian GM autoworkers was read by Frank Hammer and Melvin Thompson, past presidents of UAW Locals 909 and 140. With GM world headquarters located just six blocks away from the rally, Thompson and Hammer reflected on the important role of workers in the United States in confronting the industry bosses to demand they fulfill their obligations to provide assistance to the injured workers.

Official City of Detroit recognition awards were presented by Councilwoman Mary Sheffield. The awardees were Dr. Silas Norman, the Associate Dean of Admissions at the Wayne State University Medical School, who had served as director of the SNCC voting registration campaign in Selma between 1963-65; Martha Prescod Noonan, a veteran SNCC field secretary in Alabama and Mississippi, an educator and co-editor of the seminal ?Hands on the Freedom Plow? book published four years ago by the women of SNCC; and Rev. Edith Woolen-Worthy, the chairperson of the Social Justice Committee at Hartford Memorial Baptist Church.

The ongoing struggle for water rights in Detroit was addressed by peoples? Atty. Alice Jennings, who was the lead counsel in the class action lawsuit filed in bankruptcy court during July 2014 demanding a moratorium on water shut-offs and the adoption of a genuine affordability plan for residents. Jennings has filed an appeal in federal court after bankruptcy Judge Steven Rhodes refused to issue an order to halt the termination of services to the working people and poor of Detroit.

Also Atty. Jerry Goldberg of the Moratorium NOW! Coalition spoke to the need to continue the struggle against the banks. Goldberg intervened in the bankruptcy on behalf of retired city employee David Sole, and by doing so, was able to put emergency management and the financial institutions on trial.

Goldberg conveyed that the city was facing yet another burgeoning crisis with 62,000 property tax foreclosures looming while the right-wing state government refuses to utilize hundreds of millions of dollars of federal housing assistance funds that could pay all delinquent residential tax bills and therefore avert a major crisis of evictions and displacement. He called for an immediate moratorium on all foreclosures in the Detroit.

There was also a focus on the plight of Rev. Edward Pinkney, a political prisoner in Michigan from Berrien County in the southwest region of the state, who was railroaded through the courts by an all-white jury and judicial system on unproven felony forgery charges related to a recall campaign against the mayor of Benton Harbor. Marcina Cole, an advocate for Rev. Pinkney, called for people to demand that the activist be released pending an appeal of his unjust convictions. Rev. Pinkney was sentenced to 30-120 months in prison and is now being incarcerated in Marquette Prison, some eight hours away from his home.

Other speakers included Marian Kramer, who paid tribute to the late labor organizer General Gordon Baker, Jr. Pat Driscoll, a retired United Steelworkers (USW) union member, read a statement of solidarity with the Boston school bus drivers, represented by another USW Local 8751. The union may embark upon a strike soon while four of its leaders remain terminated by Veolia Corporation after an illegal lock out during the fall of 2013.

The march through downtown was led by African American youth who carried a ?Black Lives Matter? banner. Additional banners and signs read ?Jail Killer Cops,? ?Stop the Theft of Our Pensions,? ?End Poverty, Racism and War,? along with placards featuring photographs of Michael Brown, Aiyana Stanley Jones, Eric Garner and many other victims of police violence.

This demonstration went past the 36th District Court to emphasize the crisis of foreclosures and evictions in Detroit. The court presides over thousands of evictions every year, many of which are illegal.

Later the crowd marched on the Wayne County Jail to illustrate the crisis of mass incarceration of African American and Latino youth. The demonstration then proceeded through the Greek Town entertainment and casino district, where people came onto the streets to watch and photograph the crowd that extended back several blocks.

After this the march went to the headquarters of the Detroit Water & Sewerage Department demanding a moratorium on shut-offs, protesting the regionalization and attempted privatization of the publically-owned system, one of the largest in the U.S. Heading back to the church, demonstrators chanted ?No Justice, No Peace?, ?Black Lives Matter,? ?I Can?t Breathe?, and other slogans.

Back at the church a community meal had been prepared by the Detroit Wobbly Kitchen and Food Not Bombs organizations. These groups have provided this meal for the last eleven demonstrations.

The event is financed solely by community organizations, concerned religious groups and supportive individuals. This rally and march represents one of the largest annual gatherings of progressive forces in southeast Michigan.