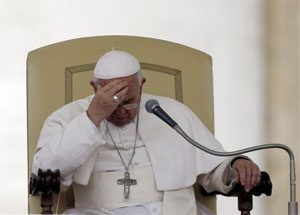 Pope Francis said he felt ?compelled? to personally take on the evil which some priests had committed

Pope Francis has asked for forgiveness for the ?evil? damage to children caused by sexual abusers in the clergy.

In quotes carried by Vatican Radio, he described the abuse as a ?moral damage carried out by men of the Church?, and said ?sanctions? would be imposed.

It is being described as his strongest statement on the issue so far.

The Pope set up a committee last year to organise help for victims of clerical sexual abuse but has been accused by some Catholics of dragging his feet in acknowledging the extent of the moral and mental damage caused by paedophile priests, the BBC?s David Willey reports from Rome.

Pope Francis made the statement on Friday, during a meeting with a Catholic children?s non-governmental organisation, the Vatican Radio website reports.

He said he had felt compelled to ?personally ask for forgiveness for the damage [some priests] have done for having sexually abused children?.

He said that the number of priests who had committed abuses were ?quite a few in number?, although ?obviously not compared to the number of all the priests?.

?We will not take one step backward with regards to how we will deal with this problem, and the sanctions that must be imposed,? he said, adding: ?We have to be even stronger?.

In an interview last month, Pope Francis defended the Catholic Church, saying: ?No-one else has done more [to tackle child sexual abuse]. Yet the Church is the only one to have been attacked.?

It came after a UN report accused the Vatican of systematically placing the ?preservation of the reputation of the Church and the alleged offender over the protection of child victims? ? something the Church has strenuously denied.

The Catholic Church has faced numerous allegations of child sex abuse by priests around the world and criticism over inadequate responses by bishops.

Earlier this year Pope Francis strengthened Vatican laws on child abuse, broadening the definition of crimes against minors to include sexual abuse of children.

While in office, predecessor Pope Benedict XVI apologised to victims of child sex abuse, saying he was ?truly sorry? for the ?sinful and criminal actions? committed by priests.