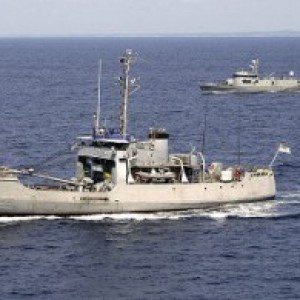 The Canadian Government has presented two speed boats, oxygen cylinders and scuba diving fins to the Ghana Navy to enhance its patrol of Ghana’s waters.
Mr Christopher Thornley, Canadian High Commissioner to Ghana, presenting the items on behalf of the Canadian Government said the items form part of a one million dollar support to the Ghana Armed Forces.
Mr Thornley said the support, which comprised equipment and training of personnel was to cement the partnership between the two countries.
He said the Canadian Government would continue to work with Ghana towards intensifying security to help prevent human smuggling into Canada as well as stamping out of illegal activities including narcotic issues.
Major Ignatius Awuni (rtd), Operations Officer at the National Security, receiving the items on behalf of the Navy, said the Ghana Armed Forces last year received some items from the Canadian Government.
Major Awuni (rtd), who is also the Training Coordinator for the programme, indicated that as part of the partnership, trainers from South Africa have so far trained 18 personnel consisting of 10 from the Ghana Navy, six and two from the Ghana Army and Air Force in that order.
Those trained, he noted, would go to South Africa for a specialist course to enable them come back and train others who would be used to expand the Marine Combat Team.

Chiefs involved in ‘galamsey’ to be sanctioned