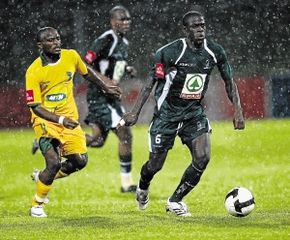 Ghanaian midfielder Mohammed Issah-Awal has been handed a four-month worldwide ban and slapped with a $170,000 fine by the South Africa football authorities for breaching his contract with his club side AmaZulu.

AmaZulu won the record damages against the Ghanaian after the player abandoned the club earlier this season, in breach of his contract.

The Premier Soccer League?s Dispute Resolution Chamber ordered that Issah-Awal pay the Durban club about R1.7-million in damages within a month and imposed a four-month playing ban on the Ghanaian.

Usuthu claim Issah-Awal is in breach of a contract that he signed with the club until June 2016, after he walked out on the team last November.

Their award from the DRC is a landmark one in South African football.

?The PSL Dispute Resolution Chamber ruled that the Ghanaian international breached the contract between him and AmaZulu and upheld Usuthu?s claim for damages,? the club confirmed on their website.

?The PSL DRC also imposed sporting sanctions on Issah. This means Issah will be banned from playing official games for the next club he joins for a period of four months from the date he is registered to play for that club.?

The DRC ruled that Fifa be notified of the findings, and if they are endorsed, Issah-Awal will be unable to play professionally for any club in the world until he meets the conditions.

Africa Needs US$2.8 trillion Yearly To Implement Its NDCs